Ace singer-songwriter Seán (Doctor) Millar has just released his sixth solo album, Ruining Everything, having endured not only pandemic lockdown, like the rest of us, but overcoming some personal health issues as well. Here he chats about the making of the record, his influences, and what else he has been up to.

So Seán, congratulations. Nine years in the making?

Well, it wasn’t really nine years. It was it was two-and-a-half years, I suppose. I mean, I started demoing songs, and I’ve got a pile of songs ready to go. I would say I’ve got at least thirty songs that I’m happy with putting on a record. I mean, I’ve written hundreds over the last nine years, but I suppose I’ve just been doing loads of other stuff, the theatre stuff, and it’s the logistics of getting it together to do an album. It’s so difficult to balance the financials, and the time frame. Also, what happens is that it takes me so long to gather the wherewithal to record, in terms of my own time, energy, commitment, and money for studio time, that by the time we go to do it I’ve moved on myself personally. But with this one what was really good was I just I reached a point where I wanted to make something really raw and sort of acoustic and roots-based, and that’s relatively cheaper to do. And because of COVID I wasn’t doing anything else, so it meant this became my focus, and I got it done and got it out. I’m working on another one already.

It was Les Keye, at Arad Studios?

…as producer, yes, and he was much more ‘the producer’ on this. Like, normally when I make records, I’m co-producer. I generally work very closely on arrangements, you know, because that’s one of my skills, I guess. In fact, I’m much better at arranging music than I am at playing it. For this Les did a lot of donkey work, and he brought in Donal Lunny, and Bill Whelan the banjo player. There was a lot of his methods, no click tracks were used on the record, and huge amounts of them are single takes. So that was an attempt by Les to try and capture a sort of authentic Dr. Millar experience, and that kind of mixture of absurd post-punk and roots music that I am.

Some people are calling it your rootsiest, folkiest album.  How intentional was that, or did you arrange songs to fit the concept?

It’s very much intentional. I see this as me making a statement about who I am, or certainly who Dr. Millar is, anyway.

Well, I suppose it’s because I came from that post-punk environment, there were certain ways of doing things that I always rejected. I always thought of myself as folk musician, but I never signalled that in an obvious way. I’ve always tried to sing in voices that would be natural to me, that wouldn't be too out of step with my spoken voice. But everything’s a choice, and you mediate yourself through those choices, the way you speak and the way you sing. Because I’ve never gone for an Irishy, tragic-folky way of singing, I think maybe I’ve never been really seen as that, even though that’s what I see myself as being.

But you’re interested in all kinds of different genres of music.

Ageing is a theme on the album?

It’s very much the theme: ageing and dying. I’m always doing the same thing, I suppose. I’m always either talking about myself or telling stories, one or the other. ‘Communion Money’, for example, is just a song about family. It’s very simple, it’s just a dream that I had where I was floating in a boat out to sea with my siblings, and I felt really, really happy and safe and secure, and loved.

A lot of the songs are very narrative driven. Stories, as you say, like ‘Danny McCoy’.

Yeah,  I met a guy that I was in school with, I wouldn't have seen him for twenty-five years. Cool guy, very musical. Accidental meeting, I walked into a bar and he was having a chat with someone else I knew from school, and he told me about his life and I was going ‘Wow’ all the time, what a life you’ve had, his life was so strange and eventful, dramatic and full of adventure and incident and interest and love. Afterwards I was thinking – apart from how much I liked this person – how you kind of know people and don’t know them at all. If you’d asked me about that guy, I’d have told you that he lived in Bray, and it turns out he’s had this incredible epic life. So, it’s about assumptions, and the assumptions people make about me as well.

Could you could imagine any of these songs being done in radically different versions?

Yeah, I could. I suppose what it is, is I’m so bored with contemporary music production. If you work at it, especially my other job in theatre, I get to explore different styles. But there’s so much ‘nothing’ in contemporary music production, and I listen to a lot of production. They’re being seduced by the software, essentially. I mean, I love electronic music, absolutely love it, but there’s an art to everything, there’s an art to folk and there’s an art to electronica and there’s an art to heavy metal, there’s an art to all these different genres. And right now what I feel is, if I’m making an album, I want to actually make an album that has something real in it, that has something that is a moment of my time, that is a genuine ‘something’, that’s a drop of my blood. I want to basically pour a cup of my fucking blood into this recording, so people get something when they buy it, they actually get ‘some thing’, not just me arseing around with keyboards and stuff like that. I had to try and do all those guitar tracks, and it took time to get some of them right. It was actually hard, you know, trying to get vocals that sound like they mean something, not just me singing. I mean, I sing all day, but a vocal that has some sort of integrity, some sort of expression. That’s what I was trying to do with this. So every time I play, everything sounds a little bit different. Because I don’t try and play the album live, ever. I just try and play the songs live with the musicians who are there, for the audience that’s there. 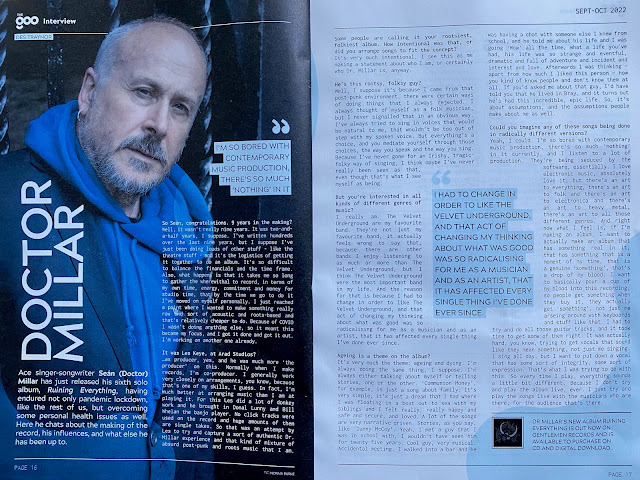 Posted by Desmond Traynor at 16:31