At U.C.D. in the '80s, I would learn more from him in 50 minutes than from everyone else in a year. His brilliant extemporary lectures were not rambling, but the verbal equivalent of improvisatory jazz, variations on a stated theme, weaving many strands until they arrived back where they started from in the finale, a couple of minutes before the tolling of the bell. But they could have gone on indefinitely. His books, equally, were something you broke your teeth on - you felt like more of a grown up after reading Celtic Revivals or A Short History of Irish Literature. Also, his novel Reading In The Dark is great, perhaps all the more so considering it is his only one. I admired him.

My favourite Seamus Deane story. Seamus strides into a lecture theatre and begins a disquisition on Middlemarch by George Eliot. After about ten minutes a student in the front row holds up a foolscap page with the letters T.S. written on it, in reference to the noted Missourian modernist. Realising his mistake, but not missing a beat, the Prof continues, “Which brings me to the influence of the novels of George Eliot on the poetry of T.S. Eliot.’

I find that I wrote a short review of Reading In The Dark on its publication in 1996, for Image magazine. Seamus' quip when I met him subsequently, after a reading: "You're marked for life."

Reading In The Dark

Firstly, an interest must be declared.  I am a former student of Seamus Deane’s, from when he was Professor of Modern English and American Literature at University College, Dublin.  He has since moved on to the University of Notre Dame.  This novel has been in gestation for almost as long as I have been aware of its author, and an extract appeared in Granta magazine as far back as 1986.  Literary gossip has it that familial objections to certain skeletons in the cupboard revealed in this highly autobiographical work were responsible for the prolonged delay.  So was it worth the wait?  The answer is a resounding ‘yes’.

This is a Bildungsroman, a rites of passage novel which, in common with other recent Irish books in the same genre, Roddy Doyle’s Paddy Clarke Ha Ha Ha and Lia Mills’ Another Alice, follows the central character through their formative childhood and adolescent years.  But Reading In The Dark goes further, in being the first Irish novel since Joyce’s A Portrait of the Artist as a Young Man to give us a glimpse into the childhood of a genius.

This is a surprisingly accessible read, considering it comes from someone whose critical work is often very prolix.  The sectarian strife of Derry in the ‘40s and ‘50s is depicted well, but there is also a mythic quality present, provided by the nearby Sun-fort of Grianan, home of the warrior Fianna.

If one accepts William James’ distinction between the tough-minded and the tender-minded, Deane is very definitely tough, as is demonstrated by the scene in which the hero confronts his father by uprooting and destroying the roses in the backgarden, which shows his strength of character.

At the heart of the book is the family secret which the son knows, the mother learns, but the father remains ignorant of, and the consequent havoc this reeks in their interpersonal relationships.  Deane may be telling stories out of school, but at least he has the necessary ‘ice in the heart’ which Graham Greene said was required by all great writers. 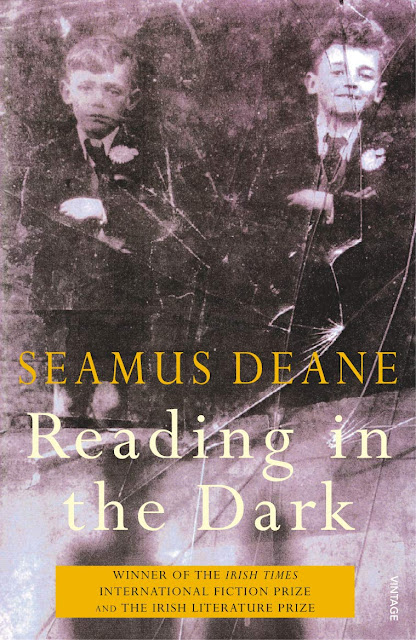