Here's a piece I wrote for The Irish Independent circa 1996. I remember at the time features editor Marianne Heron telling me that I needed to be more famous before I could start writing features like this. Hmmm.

The Avengers television series is exactly the same age I am, debuting in January 1961, and it has always held a special place in my affections. According to RTE’s autumn schedule yet another rerun is imminent, so it seems timely to ask: what is it about the programme that accounts for its continued and enduring appeal?

The Avengers began life as a vehicle for Ian Hendry, a popular actor whose own programme Police Surgeon was not proving to be a hit. His character, Dr David Keel, was aided by fellow investigator John Steed, played by Patrick Macnee, a mysterious undercover agent who became increasingly suave, wielding a steel-rimmed bowler hat and a brolly which hid a rapier. While the show started off as a crime thriller series with tough, gritty storylines, it found a new style after Hendry's departure, and the arrival of Honor Blackman's emancipated anthropologist Catherine Gale. I'm too young to remember her contribution (I was still in nappies), but my elders tell me the character stunned early sixties audiences with her stylish leather outfits and her ability to handle herself in a fight. The Avengers' popularity soared, and it became a ratings winner for ITV.

But it was with the arrival in 1965 of Blackman's replacement, Diana Rigg, as Mrs Emma Peel, the wife of a missing pilot, that the show first came to my childhood attention. Steed and Peel's adventures grew more bizarre than those which went before, as they encountered karate-chopping killer robots and vegetable monsters from space. The Rigg/Macnee episodes are the most oft-repeated and fondly remembered, typified by their inventive, sci-fi tinged storylines, their crazy villains and eccentric characters, and the intriguing, understated (but all the more powerful because of that) sexual chemistry between the two leads. The show was camp before anyone, except Oscar Wilde or Ronald Firbank, knew what camp meant, and it helped to extend the realms of fantasy fiction on the small screen. It is no coincidence that both Blackman and Rigg went on to star in what were at the time the most extravagant of latter day big screen fairytales, the Bond Movies, Blackman as Pussy Galore in Goldfinger, and Rigg as Contesse Teresa di Vicenzo in On Her Majesty's Secret Service (the only woman to ever get the action hero up the aisle).

On a personal level, what was it about Rigg's Mrs Peel that made her my four-year- old self's first screen goddess? Apart from the obvious fact that she was great looking, I must have figured that she was my kind of girl because when she wasn't busy beating up baddies without batting an eyelid, she was usually to be found relaxing by dipping into a hefty volume on astrophysics. She also seemed completely unruffled, no matter how big a jam she found herself in. When Rigg left the series in 1967, I sent her a card wishing her well for the future, and was rewarded with an autographed photograph in return.

After Rigg's departure, Macnee's new partner was Linda Thorson, a Canadian fresh out of drama school, who became Tara King. Now operating under orders from their crippled boss, Mother, the duo took on strange cases involving highly improbable threats to national security, but the show had passed its halcyon days for me and started to go downhill, and I began to lose interest.

The series was cancelled early in 1969 but was revived briefly for two seasons as The New Avengers in 1976 and 1977, when it reached its nadir. Macnee returned as Steed alongside Gareth Hunt as Mike Gambit, a younger man contrived to appeal to younger women, and Joanna Lumley as Purdey, a too traditionally feminine woman to cut it as an Avengers girl. Lumley has since proved, with Absolutely Fabulous, that her forte lies more in comedy.  But as a product of the sixties, a decade it could be said it helped to define, The Avengers could not be rehashed to suit the seventies.

Aside from her stint as a Bond babe, Diana Rigg moved on to pursue a career as a 'serious' actress, playing Regan in the BBC's production of King Lear, and Lady Dedlock in their Bleak House. Most recently she has been in Ibsen's Master Builder and Brecht’s Mother Courage at the English National Theatre.

It was only as I got older that I realised my earliest object of screen desire, my first fantasy fodder, was actually more than 20 years my senior. But she's captured forever as she was then, pristine and timeless, in those at once innocent and knowing adventures with Macnee from the mid-sixties.

Now where did I put that photograph? 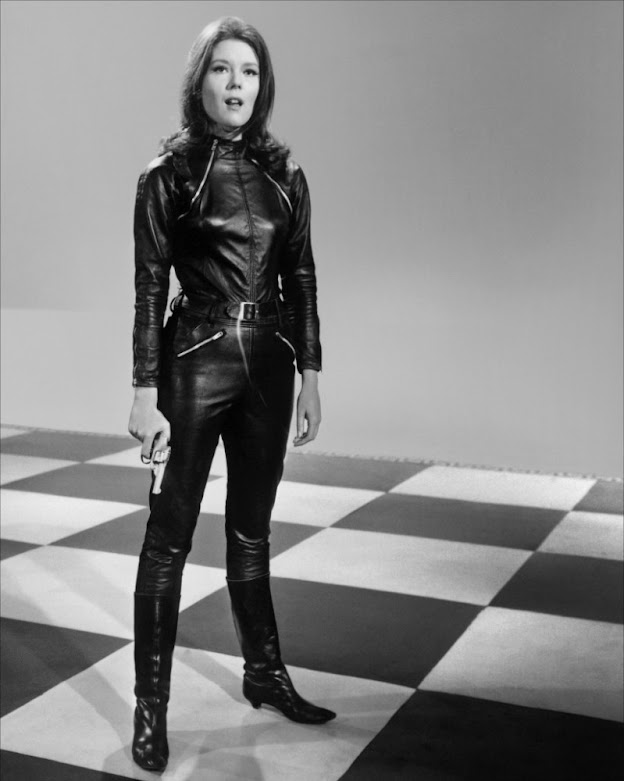 Posted by Desmond Traynor at 00:30 No comments: