Not everyone likes St. Vincent

A negative review of a St Vincent concert in the current issue of Uncut. Will the writer (a woman) be accused of ‘sexism ‘, I wonder?
Pre- recorded backing tracks, with no band, never works in the live context, in my opinion. It's not live music. Lady Gaga: the act St. Vincent could have been.
'The problem is that the smart, flesh-and-blood maxiimalism of the new album is bafflingly at odds with this flat, theatrically brittle and disengaged live staging. Clark's richly expressive voice is on great form, but the songs seem anaesthetised somehow, and there's no evidence of her wicked sense of humour. Despite its gesturing toward flashiness and fun, the show is low on energy and oddly joyless.'
'Clark's heroes, Bowie and Prince, never flew entirely solo at their peaks, and neither have Minnelli, Madonna or Lady Gaga, whose appreciation of high-end razzmatazz Clark shares, even if her interpretation is different. There's an argument to be made that no performer is responsible for their audience's expectations or obliged to satisfy them. But whatever anyone might have presumed this St Vincent show would be, lacklustre was almost certainly not it.' 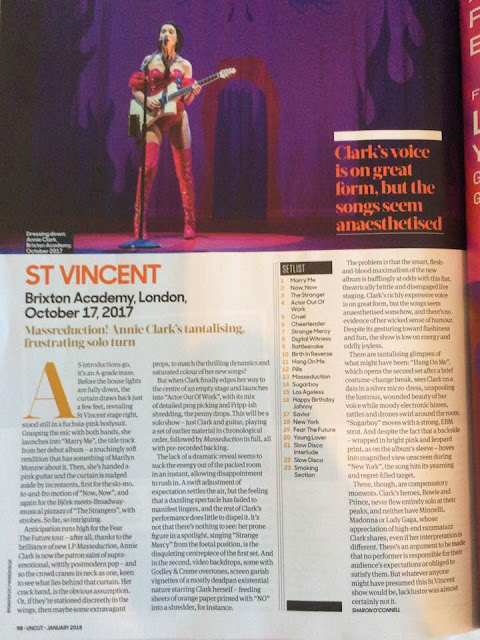 Posted by Desmond Traynor at 05:44 No comments:

The Killing Of A Sacred Deer by Yorgos Lanthimos

So I saw the widely ecstatically-reviewed The Killing Of A Sacred Deer during the week. Didn’t like it much. I’d like to know how Martin (the kid) puts his curse on Steven (the surgeon’s) family, and why it works. I’d also like to know why Steven (or his wife Anna) don’t ask Martin how he’s doing it. Or why they just didn’t go to the cops. I know that with Yorgis Lanthimos one is just suppose the interior logic of the world he creates, and take oddities and discrepancies as givens of those worlds, but there is a bit difference between ‘everyone will turn into an animal if they don’t get married within forty-five days’ (The Lobster) and ‘first, every member of your family be paralysed from the waist down, then they will stop eating, then they will start bleeding from the eyes and die' (The Killing Of A Sacred Deer). Something to do with agency. Or with everybody in this world accepting a universal given, as opposed to a given being generated by one person. Like, with Kafka’s The Trial, it really doesn’t matter why K is arrested or what he’s accused of or guilty of, because it’s a metaphor for general guilt (original sin?) in humanity, or a metaphor for a bureaucratic, tyrannical state not needing a particular reason to condemn you (they can always Trump (aha) one up). But it actually matters (at least to me) how Martin is doing this and why Steven doesn’t call him on it. Dogtooth remains Lanthimos’ best flick: that was an enclosed, incestuous world, and the parents made damn sure the outside world wasn’t going to intrude on the fictions they were peddling to their children (even if their reasons for doing so were entirely capricious). My feeling is that Mr. L has been given too much rope, and he’s run out of road. 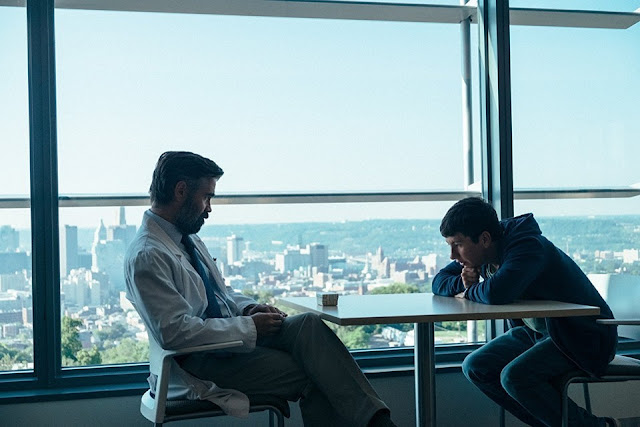 Posted by Desmond Traynor at 13:53 No comments:

For shame. A mere ten months after being sacked from taking Denis O’Brien’s shilling at The Sunday Independent for book reviews, I am now back in saddle with a book review in today’s Sunday Times, thus taking Rupert Murdoch’s shilling. I’m still waiting for The Guardian to come knocking.

By Penny Perrick
(Lilliput Press, €20 p/b)
The Anglo-Irish Leslie clan are nowadays best known as the purveyors of stately pile Castle Leslie, which entered the wider public consciousness when the wedding of Paul McCartney and Heather Mills took place there in 2002. But the Co. Monaghan estate, Glaslough, has been in the family since 1665.
Anita Leslie (1914-1985) was the eldest child, and only daughter, of Shane Leslie and his American wife, Marjorie Ide. That made her the elder sister of perhaps more well-known figures Jack (1916-2016), Ireland’s most famous octogenarian dance music aficionado, and Desmond (1921-2001), variously Spitfire pilot, electronic music pioneer, novelist, UFO enthusiast and grand-scale womaniser.
Jonathan Swift, a regular visitor, wrote: Here I am in Castle Leslie/With rows of books upon the shelves/Written by the Leslies/All about themselves, and in this respect Anita followed the family tradition, as a prolific producer of anodyne but not terribly well-researched biographies of her famous relatives, among whom numbered cousins Winston Churchill and sculptress Clare Sheridan. However, her subjects also included Rodin, Francis Chichester and Madame Tussaud, and she authored several volumes of autobiography.
Penny Perrick, a former fashion editor for Vogue and columnist for The Sun and The Times, does much to generate sympathy for her privileged and somewhat ditzy subject, who, according to her publisher, ‘never quite got the hang of spelling and punctuation’. The Leslie children - and, as a girl, Anita in particular - were woefully neglected by their parents. Shane, an Irish nationalist and Catholic convert (which did nothing to curb his philandering) seems to have had little interest in having children. Anita wrote: ‘I think we realised fairly early that our own father did not exactly dislike us – he would merely have preferred us not to have been born.’ Similarly, Marjorie ‘regarded schools as useful establishments, like kennels, where you could plonk your children when you wanted to travel…and where you could remove them when you thought that their company might be amusing for awhile.’ The worst of these ‘kennels’ was the Convent of the Sacred Heart in Roehampton: books other than school books were prohibited, and Anita had to hide a copy of Goldsmith’s The Vicar of Wakefield up a chimney.
There followed a stint at a finishing school in Paris, the horrors of the debutante season, and attempts at acting. But Anita, although tall and attractive, acknowledged: ‘An odd streak in me remained resentful of any attempt to cultivate the art of alluring the opposite sex.’ She subsequently wrote to Shane that she never wanted to marry, ‘although I might make quite an intelligent mistress – I don’t mind sacrificing my body but not my freedom.’ Eventually, in 1937, she made a disastrous first marriage to a penniless Russian aristocrat émigré, Paul Rodzianko – the only explanation for which seems to be that it was done to get back at Marjorie.
World War 2 was when Anita came into her own, and could be said to be the only time in her life when she knew what to do with herself, or made herself useful to others. Initially, she enlisted in the Mechanised Transport Corps and trained as an ambulance driver to get away from Paul - ‘Only I could invent this way of running away from a husband.’ Although pursued by Paul, who finally granted her a divorce in 1948, she served in Egypt, Syria (where she edited a troops’ newspaper), Italy and France, and became the only woman to win both the Desert Star and the Croix de Guerre.
The war brought several affairs, which became quite messy, and at one point she declared that she wanted to marry two men: Australian Colonel Philip Parbury, who later jilted her, and Colonel Peter Wilson, who fathered her first child, Tarka. In 1949 she married Commander Bill King, with whom she raised Tarka and their own daughter, Leonie, although Wilson continued to live near Oranmore Castle in Galway, which Marjorie had bought for Anita after the war.
Much of her later life was preoccupied with the vicissitudes of maintaining the two draughty, leaky, dilapidated castles, and a flat in London, as well as the horses and hunting associated with the Ascendancy classes. She also became the classic ‘mother-in-law from hell’ for Tarka’s wife Jane, micro managing her children’s lives. Indeed, Anita was not without her dark side, and Perrick does not shy away from recounting her virulent pre-war anti-semitism. She regarded Jews, along with intellectuals and the professional classes, as ‘clever’ – not a compliment to someone who insisted that everything should be ‘delightful and amusing’.
In some ways, the book’s style can mirror that of its subject: it contains no index or footnotes, and will therefore be of little use as an academic biography. However, it is a readable account of a life that, if not exactly well lived, was rarely boring, and a time when, as they say, one half didn’t know how the other half lived.

Posted by Desmond Traynor at 13:44 No comments: