As a further tribute to the late great Wilko Johnson, here's a review of the Dr. Feelgood boxset All Through The City, which I wrote in 2012, for the now-defunct website, State.ie.

As the currently showing BBC 4 documentary series Punk Britannia persuasively hypothesises, the revolution of 1977 was the bastard offspring of the miscegenatious union of r’n’b and glam, when the pub rock and art college scenes met. From the former came most of the music, from the latter most of the look and attitude. Always somewhat Britcentric, the Beep elides the fact that as early as 1973 crazy Yanks like the New York Dolls were wearing women’s clothes while covering Sonny Boy Williamson and Bo Diddley songs. But then again, both Joe Strummer and Ian Dury attended art colleges and played in pub rock bands prior to New Wave apotheosis.

Around the same time the Dolls were first trying on their high-heeled platform boots, Canvey Island’s Dr. Feelgood were tearing up the London pub scene with incendiary live shows which many seasoned gig goers were saying they hadn’t seen the likes of since the early days of The Who or The Stones. While scruffy off-the-peg suits were favoured as stage wear over silk or satin dresses, the same musical spirit animated them as that of their transatlantic tranny contemporaries. A brief band interview for Finnish television, at the end of the collection of live performances included in this marvelous new 3 CD + 1 DVD boxset of the band’s first four albums, plus unreleased demos, alternative versions, out-takes and live tracks, features the taciturn rhythm section of drummer John ‘The Big Figure’ Martin and bassist John B. Sparks (both of whom looked like burly bouncers you wouldn’t want to meet down a dark alley), the grimly polite singer Lee Brilleaux, and cocky young guitarist Wilko Johnson, who helpfully explains the r’n’b ‘revival’ thus: ‘It’s the best music. People have had six years of synthesisers and songs about hobbits. That’s for girls. People want to have a good time.’ As someone with a degree in Medieval English from Newcastle University, which he shrewdly kept quiet about, as well as considerable musical knowledge and ability, perhaps he was better placed to diagnose the deleterious influence of Tolkien on popular music than many would have given him credit for at the time.

They had their precursors, and their peers (Eggs Over Easy, Ducks Deluxe, Brinsley Schwarz, The Kursaal Flyers, Strummer’s 101ers, Dury’s Kilburn and the High Roads – even early Boomtown Rats), but they were the best. This was largely, in my opinion, down to Wilko’s wildly idiosyncratic guitar playing, whose self-confessed primary influence was Mick Green of The Pirates. Yet, although he was operating in a genre which thrives on notions of ‘passion’ and ‘feeling’, Wilko played like a machine, producing a weird r’n’b/motorik hybrid. Like forebears Otis Rush and Albert King, and the closer-to-home Jeff Beck, he eschewed the plectrum, his right hand a freestyle of fingers’n’thumb, conjuring choppy insistent rhythms and angular staccato lead lines, sometimes seemingly simultaneously. There’s less that separates the Feelgoods from Neu than you might think. The Man Machine, indeed. One shouldn’t, of course, overlook the solidness of the rhythm section itself in this process. Razor-sharp time-keeping was still the preserve of human beings in those days. Add to that the pent-up anger and frustration of Brilleaux, a front man who looked like he might hit you as soon as sing to you, which made him the scariest stage presence yet encountered in British live music, and who remained so until a sneering Johnny Rotten swaggered into the spotlight to unbeknowingly inherit his mantle, and the package was complete.

What’s in the box? CD 1 has Down By The Jetty and Malpractice, both from 1975, the former the excellent re-master of the original mono mix released as a deluxe reissue in 2006 (thankfully still in mono), the latter, like the two albums on the succeeding CD, a new 2012 digital remaster.  CD 2 contains the peak and the valley, 1976’s Stupidity and 1977’s Sneakin’ Suspicion.  Produced, like the first two, by Vic Maile, who’d engineered The Who’s Live At Leeds, Stupidity is their masterpiece, one of the great live rock albums, made by a band who were always most at home in the live context. The rot set in with Sneakin’ Suspicion. Although signed to United Artists in Britain, they wound up on CBS in America, who felt their substantial promotional investment justified foisting their own choice of producer, studio veteran Bert De Coteaux, on the project. This resulted in an altogether too slick sheen to the sound, unsympathetic to a raw band like the Feelgoods.

There had been friction between Johnson and Brilleaux anyway. Wilko liked speed, and was partial to acid; the other three were serious drinkers (not that these recreational pursuits are necessarily mutually exclusive, but it proved so in this case). Jealously about ‘residuals’ may have also caused disputes, with Wilko doing the lion’s share of the songwriting. Whatever way you slice it, Johnson played on the album but never toured it, walking out of the sessions and subsequently forming the Solid Senders. As his replacement, the others drafted in John ‘Gypie’ Mayo, a perfectly adequate if rather more conventional r’n’b guitarist, who on later albums only served to illustrate how special Wilko had made Dr. Feelgood. Interestingly, some of the odds’n’sods on CD 3 are demos for Sneakin’ Suspicion, and tracks that were left off it, which show what a good album it could have been if the band had been left to its own devices. The DVD pulls together a variety of TV appearances (dig those cruel V-neck jumpers on The Geordie Scene’s audience) and live sets from shows at the Southend Kursaal (some of which wound up on Stupidity) and the Kuusrock festival in Finland. The package also includes a recent interview with Johnson, some natty comic strips and pics, plus a revelatory essay about their formative years, ‘The Breeding of Dr. Feelgood’, by poet Hugo Williams. (Another renowned poet, Tony Harrison, was apparently a huge mentor to Wilko at Newcastle, and later a close friend.)

I saw them once, at the National Stadium in 1976 (don’t worry, I hadn’t even done my Inter Cert, as it was then known, at that stage) unfortunately just after Wilko had left. I saw the Solid Senders some years later, and have seen Wilco several times since. He played Whelan’s not so long ago. Good shows all, but together they must have been somethin’ else.

The New York Dolls may have beaten their British counterparts to the punch by several years as progenitors of punk, but in this boxset you have a valuable document of one of the antecedents of British New Wave, the other strand of which was being provided by T Rex et al. The Feelgoods and Roxy Music? It’s a strange fusion, but that’s one of the great things about popular music: once you get beyond the fashion, it’s all there for you to choose your own particular pick’n’mix. 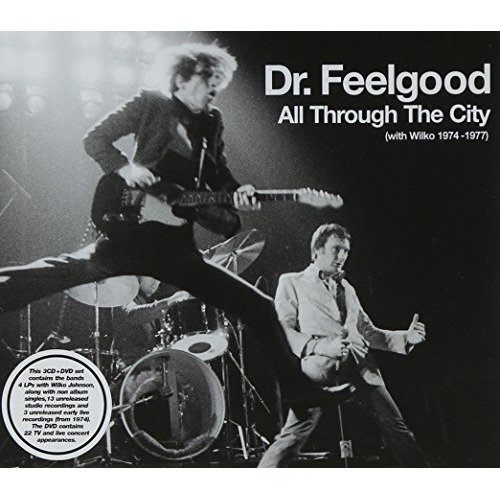 Posted by Desmond Traynor at 17:28 No comments: