Desmond Traynor        Caterina Barbieri (Haunted Dancehall)/National Concert Hall
Readers of a certain vintage (that is, probably only me) may dimly remember a 24-hour non-stop music and film festival called Dark Space, which took place in the then Project Arts Centre on February 16th, 1979 (1000 tickets, £6 each.) Amid appearances from acts from across the water like The Mekons (Throbbing Gristle and Public Image Ltd were billed, but later pulled out, forcing the organisers to reduce admission to £4), and Rudi and Protex from north of the border, it also provided a showcase for emerging local talent, such as The Idiots, The Atrix, The Virgin Prunes, D C Nien, Revolver, and U2 (who, without a record release, were then still playing catch-up in the same aspiring league as contemporaneous hopefuls like Echo and The Bunnymen and Joy Division). Most importantly, it acted as a unifying catalyst for the local scene, where friendships were made, future collaborators were met, and networking (although we didn’t call it that back then) took place.
Something similar, if decidedly more avant garde, appears to be taking shape courtesy of the National Concert Hall which, with the help of promoters Foggy Notions, threw its hallowed doors open for two late nights at the beginning of October for Haunted Dancehall, a celebration of Electronic/Experimental music including Oneohtrix Point Never, Caterina Barbieri, Blackhaine, Coby Sey, Sunil Sharpe, Roger Doyle, Debit, Elaine Howley, R. Kitt and more. What is interesting about this event is its bringing together artists from the intersecting worlds of electronic, contemporary classical, ambient, hauntology, noise and experimental music, who performed in five different rooms throughout the venue.
Unfortunately, considerations of space preclude detailed reviews, but one of many highlights for me was Italian composer and musician Caterina Barbieri, who drew on compositions from her latest album Spirit Exit, 2019’s Ecstatic Computation, and 2017’s breakthrough Patterns of Consciousness, to create an eerie yet compelling demonstration of modular synth virtuosity. What is notable is how she performs her set, with graceful arm gestures and the part-android illusion created by a dress with silver filigree on one arm, which suggests a haunting humanity and emotional resonance animating the patterned electronic pulses.
Haunted Dancehall is a project supporting the work of the Night-Time Economy Taskforce, which encourages national cultural institutions to collaborate with more diverse partners and open up their spaces to new artists. Let’s hope this massive initiative becomes a regular feature in the NCH’s annual calendar.
First published in The Goo. 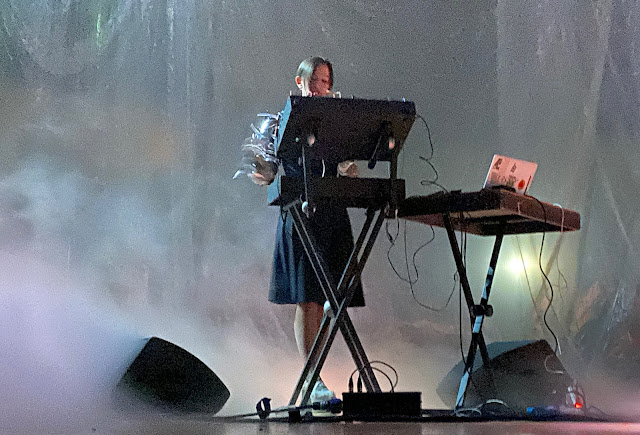 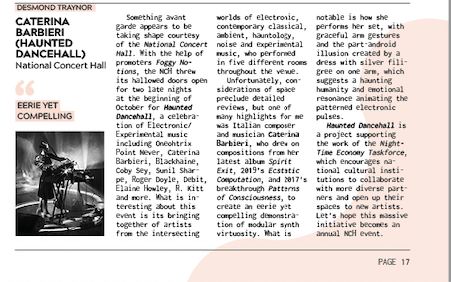