This piece was rather cruelly edited when it appeared on State.ie as part of their End of Year 'Best of' list, last January. So here's the full version. It was State's Film of the Year.

It is, of course, highly stylized, in the signature way all of Wes Anderson’s films are. At this stage in his filmmaking career, you probably know if the distanciation techniques of Anderson’s singular aesthetic – most obvious in the meticulous set and costume design and rectilinear, near-geometrical shots, but also there in the sometimes almost Japanese Noh play type acting – float your boat, or not. As far as I’m concerned, he has never made a bad film.
Many of his recurring themes are present in this one too: fucked up, dysfunctional, well-heeled families (The Royal Tenenbaums, The Darjeeling Limited); precocious, outsiderish kids, in over their (expanding) heads (Rushmore); going on the lam (Bottle Rocket, The Darjeeling Limited again). Twelve year olds Sam (Jared Gilman) and Suzy (Kara Hayward), two smart, unpopular kids, fall in love with each other in New Penzance, a little coastal town in New England, in 1965, and elope. That’s all you really need to know. Oh, and Sam is an orphan, a member of a scout troop on summer camp on the island, and Suzy is the eldest offspring of the local legal family. It was love at first sight the year before, and they’ve been writing to each other ever since. Perhaps the single most defining line of the movie is when Suzy opines to Sam: “I always wish I was an orphan, most of my favourite characters are. I think your lives are more special”, to which Sam succinctly replies: “I love you, but you don’t know what you’re talking about.”
The performances of the two newcomer leads are great (their love scene gets the pitch of their nascent sexuality just right), but so also are those of all the other principals: Frances McDormand and Bill Murray as Suzy’s estranged parents, who in an old ironic/romantic joke gone sour, like their relationship, address each other as ‘Counselor’; Bruce Willis as the local police captain; Edward Norton as the Scout Master. The loneliness of these adults’ barren lives is what you sense Sam and Suzy are desperate to avoid. Jason Schwartzman has a cameo as a cooky Cousin Ben, and Tilda Swinton is at her icy, demonic, cut-glass accent best as the dreadful and dreaded Social Services.
I suspect what rubs most naysayers the wrong way about Wes Anderson’s films is the sense of wealth and privilege (or sometimes just plain unselfconscious arrogance) insulating characters from the problems of the so-called ‘real world’. Or else that his films don’t deal with ‘real’ problems at all. But these kids are vulnerable, especially Sam. You see, apart from being highly stylized, Moonrise Kingdom is also a love story. It is, finally, about the pain – and resilience – of being young, of trying to negotiate the transition from childhood to adulthood with as little messy adolescence as possible, and with precious few grown-up role models to look up to, much less emulate. Does love conquer all? You can bet your sweet bippy it does. 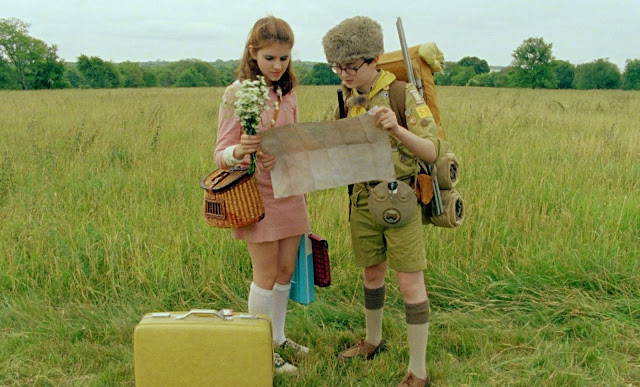 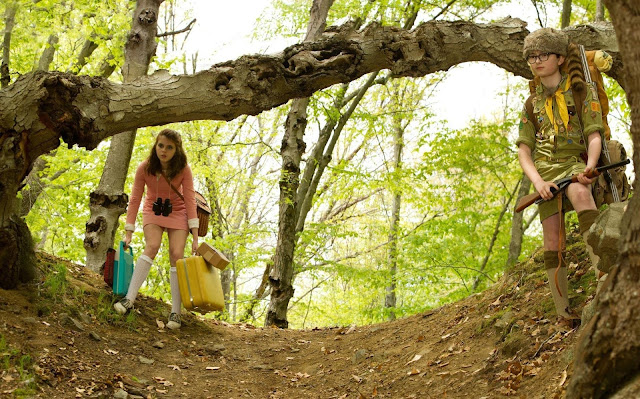 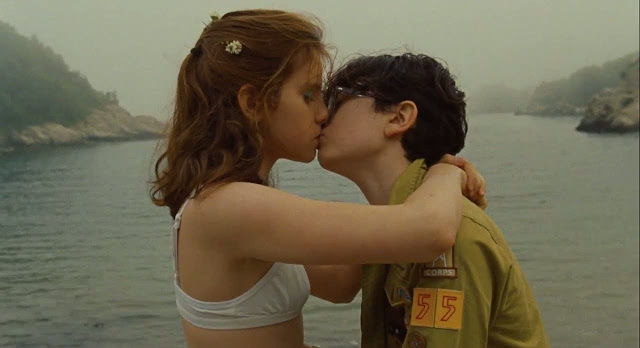 Posted by Desmond Traynor at 13:40