The Strypes at The Academy

Everyone knows The Strypes are retro, but what of it? There’s good retro and bad retro, and these guys fortunately fall into the former category. As they’ve said themselves, perhaps with a touch of hubris, The Stones started out playing covers. So did The Beatles, for that matter. Most bands do, unless they can’t actually play other people’s songs.
There is, of course, the danger that they can be dismissed as just a showband for old guys my age, who want to feel comfortably vindicated that the music they like is being taken up with passion and assurance by the younger generation. There’s also the problem that, what with all the positive plaudits being bandied about by some of their heroes like Wilko Johnson and Paul Weller (both of whom they’ve recently shared stages with), Noel Gallagher, Dave Grohl and Elton John (???), people will stop cutting them some slack because of their ages (ranging from 15 to 17 year old), and start questioning if they are serious contenders, regardless of their fresh-faced youth. These concerns, however, are dissipated in the euphoric rush of their live set.
In deference, perhaps, to the younger members of the audience, the Cavan boys take the stage at 9pm (after a warm-up poem by none other than admirer B.P. Fallon) and finish up at 10.30 (rather than the more usual 9.30-11 shift). The gig is an official album launch for their debut Snapshot, so not surprisingly most of it gets played. They kick off with ‘Mystery Man’ followed by ‘She’s So Fine’. ‘What The People Don’t See’, ‘She’s So Fine’ and ‘Angel Eyes’ all follow in quick succession.
What’s obvious is that, while guitarist Josh McClorey fairly bosses it on stage, musically the band work as a tight integrated unit. Bassist Pete O'Hanlon may only come into his own later on, when he swaps his instrument for a harmonica, and drummer Evan Walsh – no Keith Moon – tends to lose out in the visual stakes, stuck as he is behind his kit, but they anchor the sound solidly. ‘Blue Collar Jane’ is particularly raucous, and ‘Perfect Strom’ and ‘Hometown Girls’ also figure. For a bunch of lads who’ve quit school to do this before even getting into Leaving Cert class, they’ve certainly got the moves and the camera-pleasing poses, and most importantly, the chops. McClorey is already a brilliant, confident guitarist, the equal of any twice or three times his age.
As always, the set is liberally sprinkled with covers, including Bo Diddley’s ‘I Can Tell’ and Willie Dixon’s (recorded by Bo Diddley) ‘You Can’t Judge A Book By The Cover’ (both from the album), and ‘CC Rider’ (recorded by EVERYONE from ‘Ma’ Rainey onwards) and Slim Harpo’s ‘Got Love If You Want It’ (neither from the album).
The show climaxes, as does the record, with their covers of Nick Lowe’s ‘Heart Of The City’ and Muddy Water’s (via Memphis Slim, Elmore James, Bob Dylan and Trad. Arr.) ‘Rollin’ And Tumblin’’, while the encore consists of more standards in Chuck Berry’s ‘Little Queenie’ and Bobby Troup’s (via Nat ‘King’ Cole and The Rolling Stones) ‘Route 66’.
Amid the hysteria and hype (which I thoroughly endorse, by the way) it’s worth pointing out that The Strypes are not yet quite the finished article. For a start, though songs like ‘Blue Collar Jane’ and ‘Angel Eyes’ are getting there, their originals have yet to match the standard of the standards they cover so well. Then, as regards their live show, any band where the lead guitarist does all the talking and the lead singer stays silent between songs is going to come over as lopsided. The relationship between the singer and the guitarist in a band is a finely balanced thing, where neither should completely dominate. At the moment, Josh is simply a too charismatic, commanding presence on stage for the group dynamic’s own good. There should be a greater sense of even friendly competitiveness between the two visual lynchpins, and sometimes singer (and youngest member) Ross Farrelly can appear as the weakest link, hanging back when he should be strutting his stuff, never a good thing in a ‘front’ man. One thinks of the example of their beloved Feelgoods, where, not to be outdone when Wilko started his robotic marching back and forth soloing, Lee Brilleaux, in one of those great WTF? rock moments, would drop on all fours and start doing push-ups centre stage. One thinks, further, of The Clash’s three-pronged attack. I was pleased to see Pete O'Hanlon channeling his inner Brilleaux in this way at one point, when Josh takes over bass duties and Ross does some rudimentary guitar playing, while Pete has his moment in the spotlight doing his crazy, head-shaking harmonica solos – but it’s really Ross’s job to step up to the plate and grab some more attention. Time to turn it up a couple of notches, Ross.
Despite these caveats, the fact cannot be denied: The Strypes are very, very good at what they are doing. How big they can be is still in the lap of the gods, but one hopes they are not crushed by the pressures of early success and the weight of expectation on their teenage shoulders.
These Kids Are Alright. 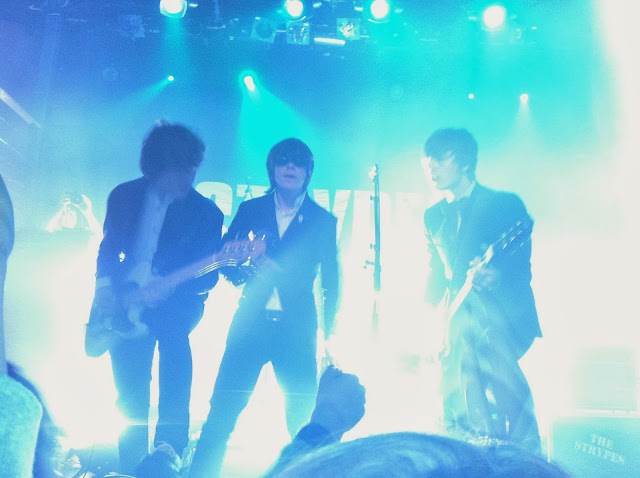 Here's a link to a YouTube video of The Strypes joined by Wilko Johnson and John B. Sparks of Dr. Feelgood for a go at the Feelgood's 'She Does It Right;, The Oysterfleet Hotel, Canvey Island, August 8th, 2013. All the more poignant as Wilko has terminal cancer. The tradition is in safe hands, and the flame has been passed.
http://www.youtube.com/watch?v=gjWrKsFgifQ