Of a sudden, I recall that I did a phone interview with the great Cathal Coughlan in 2013, for the now defunct website State.ie, about his North Sea Scrolls project with Luke Haines and Andrew Mueller. Here be the text.

What do you get when put Cathal Coughlan, of Microdisney, Fatima Mansions and solo fame, Luke Haines, formerly of Auteurs renown, and music journalist and travel writer Andrew Mueller together in one room? Why, three men in colonial hats and It Ain’t Half Hot Mum jungle suits, singing songs about an alternative history of Britain and Ireland. These gents are bringing their demented North Sea Scrolls show, which started life at the Edinburgh Festival in 2011 and was subsequently released as an album last year, to the National Concert Hall on November 2nd. Cathal Coughlan recently marked my cards as to what to expect, and we chewed over some other old stuff as well.

Just to fill the unsuspecting among you in, the North Sea Scrolls are ancient documents, long thought forever lost, which were presented to Coughlan and Haines by the actor Tony Allen, who found them in a bin outside Waitrose. They contain a proxy account of the recent past in these isles, demonstrating that pretty much everything you know and have ever learned about them is at best inaccurate, but more likely just downright wrong.

Who’d have thought, for example, that far from suffering 800 years of oppression under the English yoke, in reality the Irish invaded and conquered Britain in 1948, later dividing it into just two counties, Northshire and Southshire? Or that Oswald Mosley led two successive British governments in the 1960s, with Joe Meek as his Minister of Culture, while Enoch Powell was Poet Laureate? (Apropos, I’m surprised they didn’t shoehorn Eric Clapton’s once professed admiration for Powell, elucidated drunkenly from a Birmingham stage in 1974, in there somewhere) Or that the failed kidnapper of Princess Anne, Ian Ball, made a Robert Johnson-at-the-crossroads-like pact with the Devil – a gent who appears in a cloud of sulphurous cigar smoke, with a rattle of gold chains, wearing a shell suit – who ‘fixed it’ for the Broadmoor Psychiatric Prison resident to swap places with his guitar-wielding namesake in the ‘bewilderingly successful’ indie rock band, Gomez. (Considering this twist, it’s odd the boys didn’t conjure some similar case of mistaken identity between above-mention thespian Tony Allen, and the identically named great Afrobeat drummer.)

Another song, Coughlan's 'Mr Cynthia', puts the record straight on how Joe Meek put a radicalized John Lennon under house arrest in the mid-’60s, to curb the Mop Top’s influencing the country’s impressionable young folk toward dissent. In his absence from the public eye, Lennon’s then wife Cynthia immerged from the shadows into a proto-Thatcherite champion of ‘blank common sense.’ Perhaps unsurprisingly, Jim Corr figures along the way too, persuading the retired IRA to dig up much of South Armagh because he believes that Shergar, the Twin Towers and many other things are buried there.

The eagle-eyed among you will doubtless have spotted that, unlike how their illustrious predecessors the Dead Sea Scrolls act as an adjunct to official Christianity, the flaw with the North Sea Scrolls is that most of the events recounted therein would still be within living memory. Consequently, feeling that there is little point in quizzing Cathal as to the veracity of these claims, I inquire instead as to how he views the revelations of the scrolls in relation to the rest of his fine body of work. C’mon, isn’t it all just a humorous diversion, a Flann O’Brienesque jeu d’esprit?

“It’s not just a bit of fun,” Cathal responds. “I like to think it’s visionary, but not very serious. It’s also not always necessarily me speaking with my own voice. I’m so distant from Ireland now, that my view of Ireland can be inaccurate anyway. But in the past I might have come over as too po-faced sometimes, so it’s nice to do something more tongue-in-cheek.”

Which does cast into question if there’s any sense on the part of the writers, on the one hand, directing their considerable ire at soft targets like Gomez or Chris Evans (who gets burned at the stake), or in the audience, on the other hand, getting hot under the collar about a universe where Gomez and Chris Evans come off worse than Mosley and Powell. We all have our pet hates – don’t get me started on The Killers – but there again, would I bother writing a song slagging them off? Are the fairly innocuous actually more reprehensible than the outright awful? And what happens when the former are lampooned more than the latter?

Of course, Cathal is not entirely responsible for this state of affairs, as he and Luke Haines divide the songwriting credits, and vocals, between them. So, how did he meet Luke Haines? How did he work with him? Do they have an affinity?

“Well, Luke has most of the punch lines. I’m a kind of foil to him. He supplied most of the English stuff, and I took care of the Irish angle. The songs were written over a nine month period, and it was nice to meet up every so often and just hatch songs. I’d bring what I had, he’d bring what he had. I’ve known him for seven or eight years. I’m certainly a fan of Luke’s, you’d have to ask Luke if he’s a fan of mine.”

They are both lyricists – why do they need Andrew Mueller’s input?

“He provides the narration, and some historical context. He brings a certain kind of Australian irreverence. He’s also an editor of sorts.”

In his younger days across the water, Cathal was known for his antipathy towards the raggle taggle brigade back home. In the nascent days of Fatima Mansions in the early ’90s, he was heard to ask and answer from a London stage, “Am I the only person here with an Irish passport who doesn’t think Van Morrison is a god-like genius? Transatlantic fraud.” This was in the wake of the huge success of the Morrison/Chieftains collaboration, Irish Heartbeat. Might his Van ‘Grumpy’ Morrison comments be seen as kicking against perceived regression after the advances of the punk wars had dissipated? Or against perceived misrepresentation of Ireland on the international stage?

“I hated that album, I hated it more than normal because I even paid for it with my own money. But I have to say I think Astral Weeks is a great album, particularly when you think how young he was when he did it. Looking back now, I think people find all kinds of reasons for why they don’t like something - the politics, the ideology, whatever - but there’s usually a more fundamental reason: they just don’t like listening to it.

“It’s funny, when I started listening to English folk music, and discovered it was much more acerbic than Irish folk music, which is much more lush. But I’ve always loved Christy Moore, one of my favourite singers.”

Would he ever come back to Ireland, or is he firmly ensconced in London now?

“I’m over four or five times a year. But materially, there’s no way someone of my resources could just walk back into it now. I was skint then back them, I’m not that much better off now.”

“But I have a support system here. I know where to go, where things are cheaper.”

Any regrets about how he handled his earlier career? Would it have helped if he’d been less confrontational?

“A lot of the problems to do with Microdisney stemmed from insecurity, anxiety. By the time we got to the final album it didn’t seem to matter what we did, because the audience was well and truly alienated anyway.”

And his solo career?

“What I learned from making Black River Falls was ‘don’t waste time on little things’. I brought in people to get help with the strings on that, and it dictated the rest of the album.”

Has he anything in the pipeline now?

“If I do something, it’s going to be very different from what I’ve been doing recently, or even in the middle term. It won’t have a strong rhythm section, and will feature more string arrangements.”

Will he be recording?

“I’ve come to think that making a record is of questionable use, either as a means to playing in public, or for documentation. It doesn’t get you more gigs, at least not if you’ve being doing it as long as me. But we’ll see.”

Back to more immediate concerns, North Sea Scrolls has been recorded, but has divided opinion, with reviews ranging from ‘deeply engrossing and rings resoundingly with cultural and historical truth’ to ‘a discombulating listen, but also a daft, enjoyable one’ to ‘an in-joke gone horribly wrong.’ With a public interview before the show itself, you can get to explore how seriously or otherwise we should take these phantasmagorical tales, and make up your own mind this Saturday. 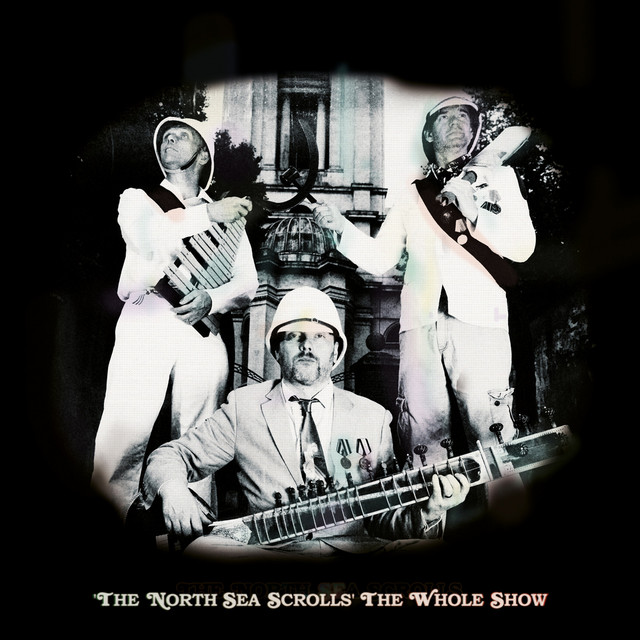 Posted by Desmond Traynor at 15:25