Willy Vlautin’s protagonists have a harder time than most. Whether it’s the Flanagan brothers on the run in his 2006 debut The Motel Life, the vulnerable and abused Allison Johnson striking out in an attempt to make a new life for herself in 2008’s Northline, the always hungry 15-year-old orphan Charley Thompson’s struggle to escape his fate in 2010’s Lean On Pete, disabled Iraq war veteran Leroy Kervin and the overworked nurse and janitor at his group home, Pauline Hawkins and Freddie McCall, in 2014’s The Free, or lonely ranch hand-cum-aspirant boxer Horace Hopper in 2018’s Don’t Skip Out On Me, the world wasn’t exactly made for these marginalised characters.

Now we have Lynette, a pastry chef/bartender/escort/part-time Community College accountancy student from Portland, Oregon, who is cast from a similarly self-sabotaging mould, although it can easily be argued that it is a mercilessly acquisitive societal system which keeps all of them in an endless cycle of hand-to-mouth alienation as much as it is the consequence of personal misfortune or individual psychology.

Subjectively, 30-year-old Lynette has been saddled with: Doreen, her tired, defeated mother; a long departed, building contractor, alcoholic father who she only ever sees when he comes to cadge free drinks from her at the bar; and Kenny, her developmentally challenged brother, two years her senior, for whom she is the chief caregiver. She also has a history of abuse and trauma at the hands of Doreen’s former boyfriend, Randy, which caused her to run away from home when she was sixteen – the dark memories of which manifested even in the midst of happiness with her beautiful ex-boyfriend Jack Burns. Now Doreen has reneged on a plan for them to get a mortgage to buy the house they rent (by buying an expensive car), which amid rising astronomical rents and lack of credit, Lynette sees as their last chance to stay in the city before their landlord sells. So she embarks on a nighttown odyssey, featuring various lowlifes, in order to call in some longstanding debts, which imbues the novel with the noirish urgency of a page-turning thriller.

We may be suffering a housing crisis in this country, but the ideological disease of greed which sponsors it – where people no longer speak of ‘my house’, let alone ‘my home’, but instead ‘my property’, and the unattainability of home ownership and the rise in homelessness which follow the accumulation of ‘rental properties’ (Great Oxymorons of Our Time: Fair Rent), which are direct consequences of said property being promoted as a legitimate form of investment rather than as a roof over your head – is imported from that beacon of neo-liberal capitalism, the U.S.A.. Portland, like Dublin, due to incessant gentrification, is pushing its working class out to new estates in peripheral towns they’d never previously been to, or in all likelihood even heard of, resulting ultimately in the evisceration of a city. When Lynette says, “The whole city is starting to haunt me. All the new places, all the big new buildings, just remind me that I’m nothing, that I’m nobody”, we can relate, as we walk by yet another new hotel or student accommodation, juxtaposed with tent dwellers along the canals, in our own capital.

Frank Kermode wrote of one of Vlautin’s avowed influences, Raymond Carver, ‘…(his) fiction is so spare in manner that it takes time before one realises how completely a whole culture and a whole moral condition is represented by even the most seemingly slight sketch.’ It has become redundant to say that Vlautin is more well-known as a singer/songwriter, formerly with that alt. country band Richmond Fontaine and now with exceptional country soul outfit The Delines, as his reputation as a novelist has now exceeded that achieved in his initial creative outlet. But he brings the same eye for detail and knack for the telling phrase already displayed in his song lyrics to his prose fiction, where one seemingly innocuous line can reveal so much. That said, Doreen’s extended monologues, particularly the concluding one with its wholesale rubbishing of the myth of the American Dream (“Isn’t that the American dream? Fuck over whoever is in your way and get what you want”), ranks among the most direct, even didactic, writing Vlautin has ever produced.

His staked-out territory remains the hardscrabble lives of America’s underclass (or squeezed middles), those lost or lonely or rootlessly marginalized blue-collar folks whom college-educated, upper middle-class Americans typically dismiss as ‘losers’ or ‘white trash’, as he continues to mine the terse, laconic, Hemingwayesque tradition in American letters, a seam whose subsequent practitioners include Carver, Denis Johnson and Nelson Algren.

A late revelation from sympathetic co-worker Shirley about Doreen’s character reinforces our intuition that Lynette is better off cutting loose from her family and trying to make a life for herself, however painful it is for her to leave Kenny behind, even temporarily. It is not for nothing that Willy always signs his books ‘Good luck always’, in pointedly unironic contrast to that ominous admonition ‘May the odds be ever in your favor’. The odds are never in his characters’ favour (just as they never favour participants in The Hunger Games), but as she drives eastward out of town on the interstate at the conclusion of this harrowing tale, we are allowed to glimpse the hope that Lynette’s journey to the end of the night might just have led to a new dawn for her. 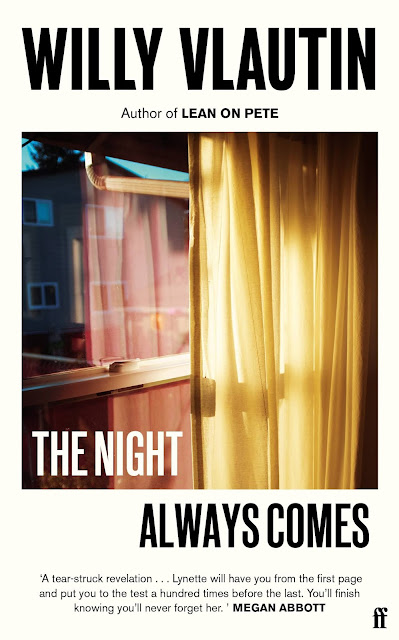 Posted by Desmond Traynor at 09:31