Maya Devereaux has been homeless for over a year when the encampment where she has been living for a month is dawn raided and broken up. After being fingerprinted and photographed, she is interviewed by Seth and Ryan, a double act of vacuous corporate-speak, who ‘seemed to have attended a recent PowerPoint presentation on the projection of sincerity.’ This duo are ‘not the usual faces of officialdom’ – neither policemen nor council workers – but representatives of the Giving Department of Green (‘Tech solutions, communications, web content, search. Your basic highly disruptive global player.’).

Maya learns she has been selected for Green’s ‘opportunity programme’, the aim of which is ‘to humanize homelessness. Select a candidate, offer a comprehensive second chance, then make that second chance public and build a following. Payoff was an even split: a new life for the candidate, brand boost for the sponsors.’ Despite realising that for Seth and Ryan, like ‘the men who tried to slip into my tent at night…Empathy was just another tactic of manipulation’, she doubts her ability to survive on the streets for much longer, and so accepts their offer. They furnish her with an Instagram account called Maya’s Journey, and a job at Pict, where she ‘parses online content for suitability’ – which essentially means she does what lots of those employed by Google and Facebook in the Dublin Docklands do: make sure vile or potentially triggering images don’t find their way on to client websites.

At Pict there is also a Wellbeing Programme or, rather, ‘mandatory detoxes’: ‘You start work with them, and they start work on you.’ The whole experience of her first weekend retreat at BodyTemple (juice, yoga, meditation: the mindlessness of mindfulness, or, as an acquaintance of mine characterises it, ‘religion without the backbone’) makes Maya physically sick. While she continues with the classes back in London, she senses that they are just a thinly-veiled, extra-curricular forum for vaguely spiritual twenty-somethings, who work in PR, advertising or media, to network and swap information on clients.

The daily Overground commute is the main evocation of the alienation of urban nullity, coupled with the redundant nature of most work (before you are actually made redundant), and her inability to sustain it was one of the chief reasons Maya fell into homelessness initially. As we are frequently told, 60 to 70% of the populations of Britain and the U.S. live three pay cheques away from a similar fate. For the precariat, it’s a stark choice between the pointless mundanity of exploitative work or winding up on the streets – unless you’ve got parents wealthy enough to subsidise you, and your endless education and training and your unpaid internships. It all adds up to a thoroughgoing critique of the tyranny of work, for those who prefer a quieter lifestyle, and a good argument for the introduction of universal basic income.

However, though largely friendless (a bout of homelessness will do that to you) Maya chums up with an environmentally ill woman she meets in a doctor’s surgery, Zelma, who enjoys defacing magazine articles and advertising billboards with factual corrections of their fatuous claims. (For an excellent cinematic treatment of environmental or chemical disease, see Todd Haynes 1995 film, Safe, featuring a fledgling Julianne Moore.) The story becomes marginally less interesting, and much more repulsive, once Maya walks out of her office building for the last time, having posted a pic of her faeces on Maya’s Journey, fetches up in a disused warehouse on an industrial estate with Zemla, and the focus shifts from Maya’s uncomfortable negotiations with the corporate world to the dynamics and tensions between the two friends and the other women who, having been vetted, come to join them – additions which don’t always feel necessary. They engage in a dirty protest on a massive scale, defecating and urinating where and when the urge takes them, but their lack of any apparent agenda or ideological manifesto, other than ‘liberation through decay’, plus the support it garners in certain quarters, increasingly infuriates the wider community. It all gets rather messy.

All good things come to an end, and when the set up is broken up, mainly through two concerned parents’ media campaign to rescue their daughter from what they perceive as a ‘cult’, Maya finds herself interacting with social workers and shrinks in a psychiatric facility, where she is described as having a history of ‘self-neglect’.

Flaws? Alright: first-person Maya analyses society’s ills and her employer’s machinations with the acuity of a socio-economics PhD, and her own feelings and motivations with the insight of an unusually competent psychotherapist, and she writes like a…well, like a writer – all without any back story of significant study and/or academic achievement, which is not by any means unlikely, but still uncommon. Her previous job, before Pict, was also as an unfulfilled office drone, so we don’t know what exactly she ever wanted to be, if anything at all. Some will baulk at the obviousness of the extended scatological metaphor – society is shit, we produce shit, let’s celebrate the shit – although it does have precedents, for example in what Middleton Murry referred to as Swift’s ‘excremental vision’. But that objection rather depends on how valid you think the analogy is in the first place, which in turn depends on how well you think society is currently functioning.

Already the author of two previous broadly satirical novels, Idiopathy (2013) and Perfidious Albion (2018), Byers’ overriding target is the hollowing out of public discourse in the digital, online, social media age (and, in this case, self-help culture) which, to take the example of Charlie Brooker, can be played for comedic (Nathan Barley) or nightmarish (Black Mirror) effect. This considerably darker new work under review falls into the latter category.

Splendidly cynical, politically astute, endlessly quotable and highly visual (there is considerable filmic potential – at least for an audience with a strong stomach): the guy can write, is one smart cookie, and this book is quite outstanding. 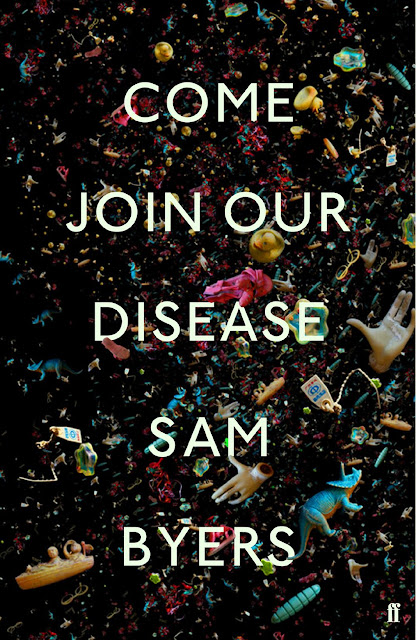 Posted by Desmond Traynor at 10:10