The Dream Songs by John Berryman is my Book of Common Prayer.

There is a mistaken notion around that JB as a craftsman is a bit sloppy, i.e. not as formally rigorous as some of his contemporary big guns: Robert Lowell, Marianne Moore, Elizabeth Bishop; and consequently his posthumous reputation has suffered somewhat in comparison with theirs. However, I contend that it is his innovation, inventing new forms, which sets him apart from them: he is more jazz, to their classicism. Besides, he’d already served his time with sonnets – a collection of earlier love poems was published after 77 Dream Songs, if written beforehand. Also, I think he is not now held in as high esteem as other major poets of his generation, in poetry circles, because he is perceived as a bit of a messer, i.e. he has a sense of humour. But, if he admits of more of the comedic, even the flippant, in my opinion he lets in more of the tragic, the pain, too. This wryness, I observe, has in contrast made him something of a reference point for a younger generation of indie rockers, who might share a similar sensibility: The Hold Steady, Okkervil River, Nick Cave and Clap Your Hands Say Yeah! all mention him in songs.

I also notice, having just read a recent Irish Times review of his Selected Letters, that the feminist revisionist backlash is in full swing against him (‘the male gaze’, etc). Look, as a male heterosexual, I am genetically programmed to find female anatomical attributes attractive. So was JB, and so is every other heterosexual male. You’re not going to propagandise that fact out of existence. Or, maybe you are, and sexuality will become as repressed and joyless as it was in this country under the Catholic Church dispensation, or as it is reduced to in Orwell’s 1984 – just a New Puritanism. To upbraid male heterosexual poets, playwrights and novelists (or any artists) for giving voice to such expressions of desire amounts to censorship; and to not write about such impulses would be a form of self-censorship at the most basic biological, hardwired level.

Equally unnecessary is the fatuous gripe about 'the deeply troubling minstrel interlocutor' in The Dream Songs. The voice which addresses Henry as Mr. Bones is Thanatos, the voice of Death, which reprimands the lustful longing of Eros in many Dream Songs with a bucket of cold water guilt, and an intimation of mortality.

Martina Evans quotes the first two stanzas of Dreamsong #4 in her review, as evidence of Berryman’s culpability:

with chicken páprika, she glanced at me

Fainting with interest, I hungered back

and only the fact of her husband & four other people

kept me from springing on her

or falling at her little feet and crying

'You are the hottest one for years of night

have enjoyed, Brilliance.' I advanced upon

(despairing) my spumoni.—Sir Bones: is stuffed,

It would have been helpful, and fairer, if she had included (or had the space to include) the third stanza also:

downcast … The slob beside her feasts … What wonders is

she sitting on, over there?

The restaurant buzzes. She might as well be on Mars.

Where did it all go wrong? There ought to be a law against Henry.

Meanwhile, here’s one of my favourites Dream Song #14 (although the sequence of 385 poems can be opened at any page at random with pleasure and profit):

Life, friends, is boring. We must not say so.

After all, the sky flashes, the great sea yearns,

we ourselves flash and yearn,

and moreover my mother told me as a boy

(repeatingly) ‘Ever to confess you’re bored

means you have no

Inner Resources.’ I conclude now I have no

inner resources, because I am heavy bored.

Henry bores me, with his plights & gripes

as bad as achilles,

who loves people and valiant art, which bores me.

And the tranquil hills, & gin, look like a drag

and somehow a dog

has taken itself & its tail considerably away

into mountains or sea or sky, leaving 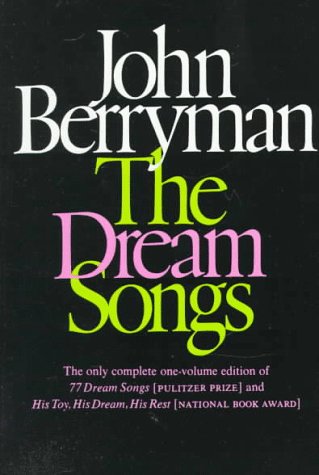 Posted by Desmond Traynor at 09:34