We went to Spiritualized on Saturday evening. This review will also appear on http://www.state.ie/author/desmond-traynor

This is not the first time your correspondent has witnessed Spiritualized doing their 1997 masterpiece Ladies And Gentlemen We Are Floating In Space in its entirety. That was at The Barbican Centre in London in December 2009, as part of the Don’t Look Back strand at the All Tomorrow’s Parties Festival. But I can happily report that tonight’s show at Dublin’s National Concert Hall is even better than that one. This is partly because the NCH, for all its chilly forebodedness, is a more intimate venue than the Barbican, and partly because the audience seem to get more involved, in terms of both general attentiveness and showing their appreciation.
The setting could have proven problematic. After all, it’s not really a ‘gig’ anymore when it’s at the National Concert Hall. The seated arrangements mean you can’t dance, for a start, something that many songs on LAGWAFIS cry out for. There were also a few punters who failed to take seriously the prompt 8pm kick-off indicated on their tickets. However, LAGWAFIS, as a ‘total’ work (or what used to be known as a concept album), partakes of the thematically integrated majesty of a classical composition. Plus, the fact that the core band are joined on stage by a choir, and string and brass sections, means the appropriateness of the venue, or lack of it, slides into redundancy as a question.
Ladies And Gentlemen may not even be Spiritualized’s best album (Pure Phase has always held a tender place in my heart), but it is the one always subjected to the Don’t Look Back treatment. The reason for its canonical status, undoubtedly, is its unified nature as the aforementioned ‘total’ work. Conceptually, its narrative describes the arc of a romance, from loneliness, infatuation and consummation to distance, breakdown, abandonment and heartbreak. Spiritualized may have better individual songs scattered here and there throughout its discography, but LAGWAFIS remains the record which acts as a summation of so much of what they do, in concentrated form. I have written elsewhere about Jason Pierce’s marvellous amalgam of various genres – principally blues, jazz, gospel, psychedelia – and all flourish on this album in unison as never quite before or since.  Even in comparison with other game-changing landmark albums of the ’90s which it is often mentioned in the same breath as – Loveless or OK Computer – it contains more of a sense of rock history, as well as looking to the future. The noise tunnels entered in ‘The Individual’ or ‘Cop Shoot Cop’, for example, certainly give My Bloody Valentine a run for their money in the avant garde noise rock stakes, ‘You Made Me Realise’ not discounted. It is, as my friend Les, a jazz buff with little previous knowledge of Spiritualized prior to that Barbican show, commented laconically afterwards, ‘very free’.
It’s hard to isolate highlights from an experience that was all one big highlight, but the band did get through the ‘freer’ elements without missing a beat. ‘Broken Heart’ was particularly poignant, and ‘Cool Waves’ blissfully cathartic. My personal favourite track from the album, the call-and-response of the divided consciousness, ‘I Think I’m In Love’, is always a pleasure. The encore consists of ‘Out Of Sight’ from Let It Come Down, and a raucously worshipful yet subtly tender reading of ‘Oh Happy Day’.
Everyone went home happy. Ladies And Gentlemen We Are Floating In Space is and will always remain euphorically iconographic, and/or, erm, iconically euphoric. 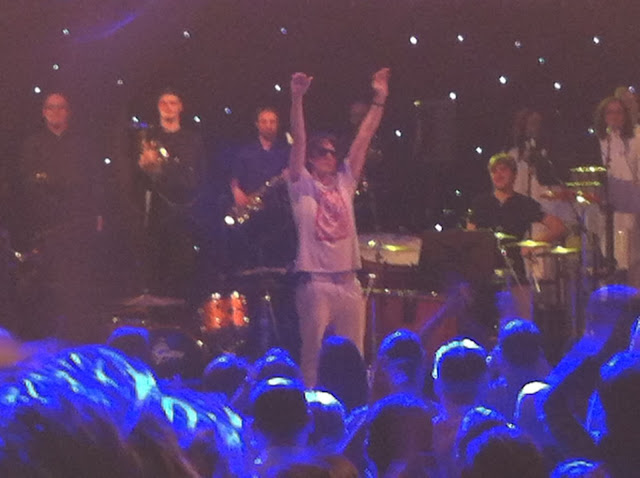 Posted by Desmond Traynor at 06:14