I am a great admirer of the work of Nobel laureate Kazuo Ishiguro. Although his more straightforward narratives have a dreamlike quality, and his more experimental work remains rooted in everyday yet universal concerns, there is certainly a noticeable distinction between his first three novels, and his fourth. Having secured his reputation, and presumably enough financial security not to have to worry too much about money, by winning the Booker Prize for The Remains of the Day, what he sprung on the public next came entirely out of left field, and sharply divided critical opinion. Esteemed literary critic James Wood – whose work I also have a high regard for, opined that The Unconsoled ‘invented its own category of badness’. As for me, I think it invented its own category of goodness. With all the atmosphere of an elongated series of anxiety dreams, it is my favourite novel of his, not least because he had the balls and the integrity to do it in the first place, but also because it is a literary work as startling, inventive and singular as Joyce’s Finnegans Wake, or Kafka’s The Trial , which it resembles a cross between Look out for concert pianist protagonist Ryder’s obsession with World Cup trivia, and his son Boris’ fascination with Subbuteo table soccer.

Ishiguro also seems like a good bloke as well. See profile below.

Also find a link to my review of his Never Let Me Go Below too. 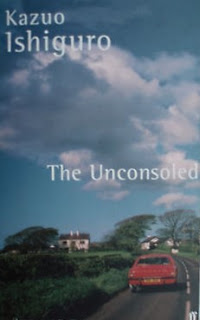 Posted by Desmond Traynor at 17:09